null 23.25% more users are travelling on the TIB network compared to the same period in 2019

23.25% more users are travelling on the TIB network compared to the same period in 2019 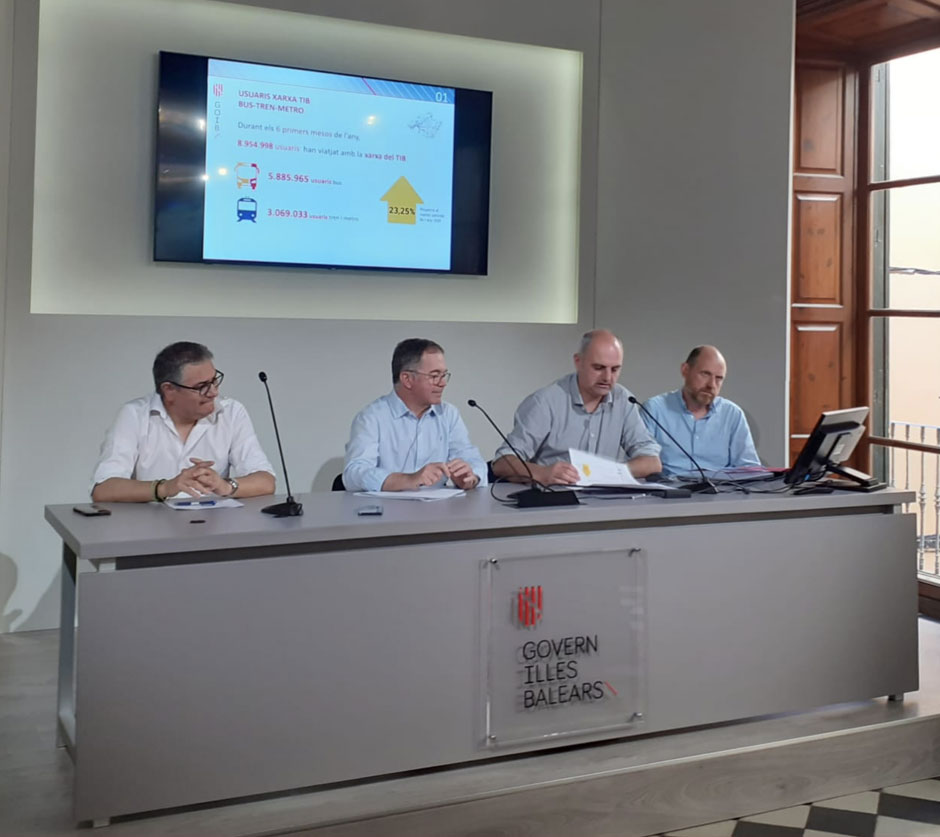 The Minister of Mobility and Housing, Josep Marí, today presented the balance for the first half of 2022 with data on users of interurban public transport in the TIB network: bus, train and metro.  The Government of the Balearic Islands made a commitment at the outset to increase the number of bus lines and train frequencies in order to facilitate the mobility of public transport users in Mallorca. This has resulted in an increase in the number of travellers.
The data presented were compared with those for 2019, the last year before the pandemic.  The results show a trend of steady growth. During the first half of 2022, there were 23.25% more bus, train and metro users than in the same period in 2019.  For the bus network the increase was 33.74%, especially in the month of June, when there were 43.80% more users than in June 2019. In the case of the train, the trend is also one of growth, with 7.40% more users than in the first half of 2019 and again the month of June stood out, with 18.75% more users.
In addition, there has also been an increase in the number of new Intermodal Cards, with 72% more new cards issued in the first half of the year compared to the same period in 2019.  If duplicates and renewals are included, between January and June 2019, the TIB issued 26,254 Intermodal Cards, while in the same period of 2022, 40,318 were issued, an overall increase of 53.57%. As a reminder, first-time IT users received a free top-up of 5 euros, which remains valid until the end of August.
Also, the use of credit cards on public transport increased in recent months, coinciding with the start of the summer season. Now, 53% of journeys by bus are made using an Intermodal Card, 30% using a Bank Card and the remaining 17% using a single ticket purchased on board. On the rail network the most commonly used method is the Intermodal Card.

New website. New online services.
The new public transport website was also launched today. The TIB has revamped its tib.org website, expanding passenger information with new features such as the possibility of seeing where a bus is in real time. It is also possible to check the timetable of upcoming departures by choosing the stop or station, find the fastest route by public transport using the search engine and see which transport ticket is the most suitable for each journey.
In addition, users can also continue to top up their Intermodal Card on the website and from now on anyone wishing to purchase a ticket in advance will be able to do so with the online ticket.